The hot muggy weather makes you realize that it’s finally summer and that as soon as that sun comes up, get ready to feel the heat. The good thing about the warm weather is that the Keys come to life. Summer time is what coming to the Keys is all about for a lot of annual visitors. The summertime fishery definitely shows people what the Keys are all about, too.

As I get up on those early summer days, I tend to not finish all of my coffee because it is just way too hot outside for me to enjoy it! Some of us coffee driven captains have to switch to ice cold energy drinks on days like this for that reason. But anyways, the pre daylight hours seem to be the most productive for morning tarpon fishing. During these early hours, there is not a whole lot of boat traffic out on the water and the fish seem to be really comfortable in their habitat. When it’s a really calm morning, you can even hear the tarpon slurping baits off the surface of the water. Sometimes it’s so dark out that you can’t even see the fish, you just simply hear them. Tarpon in the summer time will eat a variety of baits and lures. When it’s really calm out, I like to throw live crabs because they will drift into the school of tarpon with less commotion unlike live bait or a lure. Depending on the water clarity in the summer time you’ll have to adjust your leader sizes, which will sometimes make for a more technical battle.

As far as other sport fish in the summer time, I like to go after the illusive permit in the other early hours of the morning. With permit, I like to have some sunlight though so you can see them. Permit are a fish that are caught 90% by pure sight casting, which is my reason for having a little bit of light. If it is calm enough, you can see their small wakes moving on the flats or even see them tailing. Permit are very spooky, especially when it’s very calm out and you have to stalk them and make smart moves. Sometimes it’s so calm and quiet out in the summer that even a cough or a sneeze will spook these fish off the flats without returning. I typically like a low incoming tide for permit fishing on my boat. Since I’m in a 23 foot bay boat, I use my trolling motor to cruise the edges of the flats as the fish do the same, working their way in. Once again, live crabs seem to be the ticket on permit. You could use buck tail jigs tipped with shrimp, but crabs seem to be their favorite choice of bait.

On next with our backcountry adventure, we look for other species that could be on the flats. Usually we see lots of barracudas sitting in patchy areas on the flats sitting between the sand and the grass. Barracudas are not a fish that comes to mind when people thing about searching on the flats. They are one of the top predators other than sharks that live on the flats. You will often see them crush needlefish on the surface or jumping out of the water as one skips in front of them. When they are up on the flats, they are usually sitting really still, just waiting for something to cross their paths. A lot of the barracudas I see are sitting on the edges of dark grass and light sand. I feel they do this to attack baitfishes that are stunned by the light. It’s like walking into a dark room and turning the lights on; your eyes have to adjust. The barracuda uses this occurrence in the sandy areas to get baitfish while they are adjusting to changing light. When fishing for barracudas I like to use “cuda tubes” which are long pieces of colorful surgical tubing with wire inside of them and a hook or two at the end. I also like to use shiny slow sinking twitch baits since they cast a little further and are more accurate. I mostly always use wire leader or at least a heavy fluorocarbon just to make sure the barracudas don’t bite us off.

A lot of the summertime fishing in the backcountry can be a lot like hunting. There are a lot of target species around which require a good amount of patience and technique to capture. The reward is obvious though, as these spectacular sport fish all put up an amazing battle that’s different from each other in their own special way. 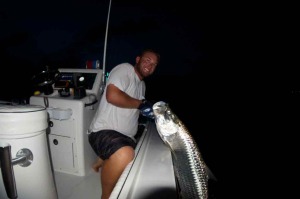