Right now is the time of year where things start to change. Key West fishing will be on fire from now on through the spring. We are just now getting into our busy season for charters, as well as the incoming of our seasonal, big game fish. We are seeing lots of action on the flats, the channels in the backcountry, as well as some shallow water wrecks in the Gulf. With changing weather patterns weekly, bait gets pushed in and out of areas where predators are to be found. Tarpon, cobia, and permit are a few of our top targeted species right now.

Tarpon are making an appearance on the warmer days, when the water has some time to heat up. The cooler temperatures we have experienced this winter have not let the tarpon get into the full swing of things, but they are definitely on their way. Tarpon are definitely thriving in full in the months of April, May, and June down in Key West. We are seeing a few early birds that don’t seem to mind a little cooler water. They are usually fish that can be targeted later in the day once the sun has warmed things up a bit in the backcountry, or with a warmer south wind day. Tarpon have shown up in Key West as early as the middle of February, so this is not uncommon. It is definitely a little strange seeing some tarpon surfacing in water temperatures below 65 degrees, but they don’t seem to care. We have had our shot at them earlier in the season before, mostly on live pinfish or cut thread fins. They do move around a lot this time of year and don’t really set up, as you’d like them to, so it can be a pretty random bite at times. There have been some big jack crevalle that are pushing with these tarpon, so usually you’ll get a strike of either when you cast near a pod of them. The tarpon fishing will get better and better form here on out, until most of our migratory fish have gone up the coast around early July. 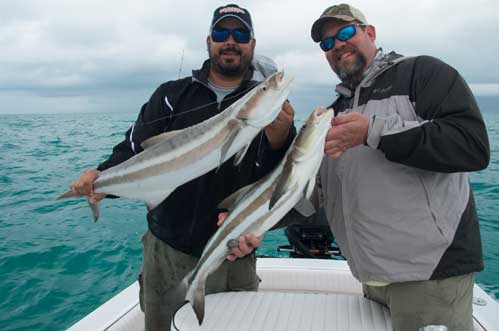 Cobia fishing this year has been wonderful. The cooler temperatures we have gotten this winter has really brought a good push of cobia into the shallows, as well as the shallow wrecks and patch reefs. The cobia start to move in to our waters once the weather gets a little cooler. They like to live in shallow channels that lead in from the gulf, as well as deeper channels with some structures. The most place where they spend a lot of their time is on shallow wrecks, where you can see them hovering at the surface. Cobia stick out like a sore thumb in our turquoise and clear waters. We like to throw anything from pinfish, crabs, and big ugly lures at them. They are a great fight and make for some awesome filets.