The fishing this spring has been wonderful. We have had beautiful weather, awesome days catching, and spending it all with great people from all around the world. The month of May is, in my opinion, the heart of the spring. We really start to experience Key West’s warmer weather, as the beating sun charges the fish up all over the backcountry.

As May rolls around, I can’t imagine not talking about the Atlantic Tarpon. These beasts have been, and still are dominating the backcountry shallows. They have came in full force and are making their way through the shallow channels, flats, and near shore waters off of Key West. Tarpon trips are the most popular type of species specific fishing charter that I am taking out right now. There are tons of repeat tarpon offenders who come down to Key West yearly to latch on to a big one. Even the less experienced tarpon anglers get hooked immediately on the size, fight, and pure power of these silver kings. Tarpon come in big schools through deep channels, edges of flats, and through shallow channels. You will see the splashing and “rolling” of these fish as they make their way through. Sometimes the silver flashes will give it away when they are congregating at the surface. A lot of fish will be in schools of twenty to thirty fish, and then slowly branch off into more shallow water in packs of ten to fifteen. When they get into the shallows, their feeding is super tide related. I’ve seen them several times in a straight line coming down the sides of the channel edge. This makes for a great opportunity to stake out and fly fish for them, or even drop baits down the edge of the channel right into their path. 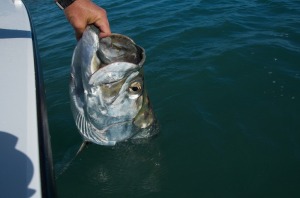 Most every backcountry guide will use live bait or artificial lure to entice these large predatory game fish. A pinfish is my preferred bait. While hooking them in different spots on their body, you can really change the way they present themselves under the surface. Pinfish, also give a chance for a by catch in the mix of tarpon. On several occasions I have caught big mutton snappers, grouper, jacks, and even permit underneath the schooling tarpon. Drifting through the schools of tarpon with a couple live baits behind the boat is the way I present when I see them moving around a lot in a deeper channel. If they are staying in a specific part of a channel, I’ll anchor up and drift baits down to them. We also see these fish up in the shallows in big groups. They will be in five feet or less. They are not super hard to see under the surface, but they are very easy to spook. I feel that the more shallow you are, the more spooky these tarpon will be; mostly because the water is more clear and they can see and hear you better. 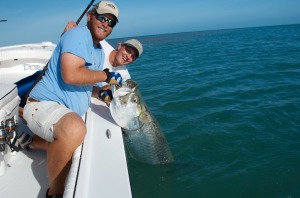 Recently I had a great afternoon bite with repeat angler Dan Berger and his young daughter Shelby. We set out in the mid afternoon just to go after tarpon. I was out earlier that day and I had hooked into a bunch of tarpon with my clients that morning. I could tell we were going to have a pretty decent afternoon. After trying many of the spots I saw in the morning, I had realized the tarpon that day were very tide specific to the spots I was fishing, which is sometimes the case. They don’t always appear in the same spots on both the incoming and outgoing tides. This was not an issue though because there are tons of spots that I knew were holding tarpon. As we kept moving spot to spot trying different presentations, I ended up going back to a spot that was the closest to where we had started at, as well as close to Key West. It’s funny how that works. We set up next to a boat that was already anchored up, one of my fellow captains from Hurricane Hole Marina. He was hooked up when I got there, and not long after our anchor set we had sore lipped a tarpon as well! These hookups lasted for a couple hours. Dan hooked seven tarpon in just a short amount of time. His daughter Shelby was the cause for our amazing afternoon of tarpon fishing, as she was picking out the best of the best pinfish in the live well. Without her, we would have been in trouble!