Fishing in November is different every year. Sometimes the weather gets cooler … and some years it is a more mild continuation of summer weather. This year has been a little different than both of those descriptions, thus far. The winds have been sustained in the 20s which is a little bit higher than average. Usually the winds of this speed are often coming on the tail end of cold fronts, and last only a couple days. This is totally different. The wind has been consistent for about a month now, and doesn’t seem to be calming down. We are though, taking advantage of a very good fishery that happens to get active with a little bit of breeze.

Drifting through open grass bed basins, we are able to cover a lot of water with the higher winds. Throwing jigs and other artificial lures seems to be the best choice in these conditions. The types of fish we are catching are mostly sport fish like jacks, yellow jacks, ladyfish, pompano, and mackerel…with trout and snappers mixed in. This makes for a fun time out on the water because you never really know what you’re going to get into. Most of the trips lately we have been drifting through these grass basins gathering fish that make good shark bait, then setting up in an area that is known for sharks so we can pull in some monsters. Catching a couple snapper for dinner can also be added in to the mix. 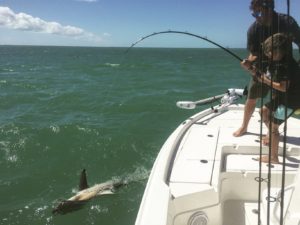 Don’t let the wind get you down from having a good time out on the water. Most of these areas are shallow enough to where it won’t get rough, and there are still plenty of fish to be caught.