The month of August in Key West is a great time to be out on the water. We have beautiful weather, tons of variety of fish to catch, not to mention the opening of lobster season. The waters have been really clear and really hot, and finding fish can be tough at times. With a few basic things to look for, you can really make your entire day productive.

My recent findings in the backcountry of Key West have been a little slower since the water is extremely hot and clear. This is not a total bad thing though. There are lots of other things going on near shore that we can get into while we wait for the water to cool down with select tide movements. There is mahi-mahi around, permit on a lot of the wrecks, tarpon in the deep channels, as well as a very productive mangrove snapper spawn right near the reef. The day is usually based around what the tide is doing so we can plan our trip accordingly. We may start out at the reef and fish a few different depths while we fill a cooler, while giving time for the tide to roll in our shallow channels. 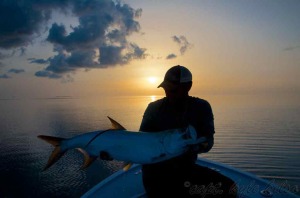 The mangrove snapper spawn is an amazing thing that happens every year in the summer time. The snappers from the backcountry shoot out to the reef to spawn over rock piles and ledges in forty to one hundred feet of water. They are a lot of times mixed in with yellowtail snappers. It is not hard to find large schools of these mangroves on the bottom machine; they will be all bunched up nearly right on the bottom. Anchoring up tide from them and chumming seems to bring them real close to the boat. The yellow tail snappers will usually sit right at your transom (1-5ft), as the mangrove snappers will sit a little further down (15-45ft). The rigs we are using for the snappers vary on the current and depth. If the current isn’t too strong, and I’m less than sixty-five feet of water, I will just use a quarter ounce buck tail or nylure jig. I cut up a piece of pinfish or a threadfin and put it on the jig itself and drop it down. Live pinfish on the jig can work as well if they are small enough. If we are in a little deeper water, I use a little heavier sinker with a 3/0 Owner Mutu-Light circle hook. Once you have limited out on mangrove snappers, we try and get the yellowtail snappers. To target the yellowtails, I like flat lining a cut bait behind the boat and just let it drift in the current. The yellowtails will be able to get to the bait before the mangrove snapper see it. There are so many snappers to go around that several boats, charter and commercial, will anchor up real close to each other and power chum the schools. It’s real nice when every one can work together to get the job done. 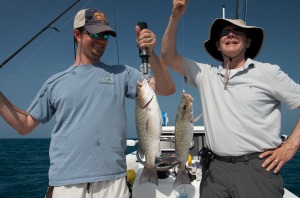 As far as the backcountry goes, the water is real hot. So what do we do? We wait for the cool water from the Atlantic to flush into the channels and flats on the incoming tide. This cools the water down a little bit and makes the fish comfortable enough to move in. The tarpon that are still around Key West are scattered and hard to find consistently…but when you do find them, they are in schools of 10-20 and ready to eat. The tarpon move in some of the shallow channels on the Atlantic side, and usually they bring other fish with them like jack crevelles and yellow jacks. Live crabs work the best this time of year for the tarpon just because it is so calm. Crabs hit the water a little more gracefully than live bait, if thrown right. We have to use pretty light leaders for tarpon this time of year because of that clear water. I am usually using thirty or forty pound fluorocarbon during the day. This makes the fight a little more difficult because you can’t pressure the fish too much or it will fray your lighter leader.

To top off they day, you can always snorkel some bottom structure or coral heads for some good old spiny lobster! This makes for an amazing add on to your snapper meal later on. August is a great time to be down in Key West just for the many different things you can do out on the water, mixed in with the beautiful weather. From any depth of water you fish, there is something that all levels of anglers and outdoor enthusiasts can enjoy.