It’s always a fun to look back upon my previous years’ Key west fishing logs to see how much has changed out on the water. The fish always having you wondering where they are going to be next, and which habitats or areas will be more productive in the upcoming season. My clients and I get to go on a hunt together, which often makes for lasting memories and sometimes forming annual traditions.

I recently had the opportunity to fish with an amazing young angler, Johnny Stanson, and his father, Dale, from Kansas. He and his father always go fishing together back home in their various ponds scattered around their property line. Everywhere they adventure to, they always make sure to set aside some time for a little father/son fishing outing. We journeyed out to a couple channels I had fished earlier that week where I knew the action would be consistent. Johnny’s first cast got him hooked up. He managed to throw right next to a passing school of jacks, where they seemed to fight over his artificial plug. The school was thick and they attacked so quickly that he got a two for one deal! Sharks were not too far behind his double jack hookup, as he barely got this strong fighting duo back to the boat. Just minutes into this exciting adventure, I got the smirk from Johnny that he was having a great time. As he was asking about the shark followers, I got the gist that Johnny wanted to latch on to one of these predators. Not long after, he got hooked up to a black tip shark almost as big as he was. Johnny had officially landed the biggest fish of his life. Key West fishing was now his new favorite thing. 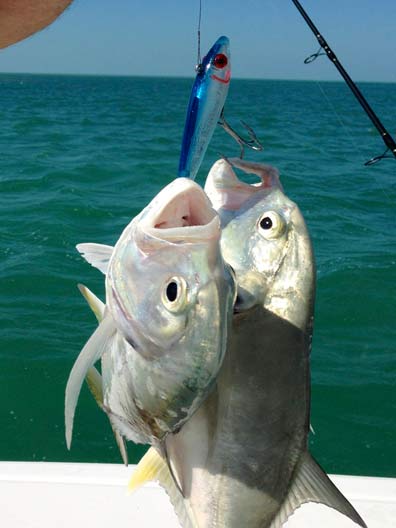 Later in the day, it was dad’s turn. We were fishing near a pristine mangrove island searching for barracudas and snappers. I spotted a few outlines of split black tails coming in on us from the surrounding grass flat. Dale got ready and was able to catch the fish that he had been talking about that whole morning; the illusive permit. Already using a pink buck tail jig for mangrove snappers, Dale was able to launch his shrimp-tipped jig near his target fish, successfully getting a hookup. He was super pumped after he was able to accurately aim and hook this tricky flats species. Sometimes schools of permit come cruising in on the surrounding flats near our mangrove islands in small schools. If you aren’t constantly scanning the area for constant changes in the environment, you won’t see these prized Key West sport fish. They come and go quickly, and don’t always scoop up what you offer them. Many times you won’t have the correct form of bait to throw to them the moment they show up, but luckily that day they were in the mood for shrimp scented jigs. I really felt like I got to share the bond between this father son team. Accomplishing both of their goals, I got the feeling that I left them with a special memory. When they smiled at each other at the day’s end, I reminisced of times fishing with my dad, alongside my grandfather, when I was Johnny’s age. These are memories and traditions that families hold valuable forever. 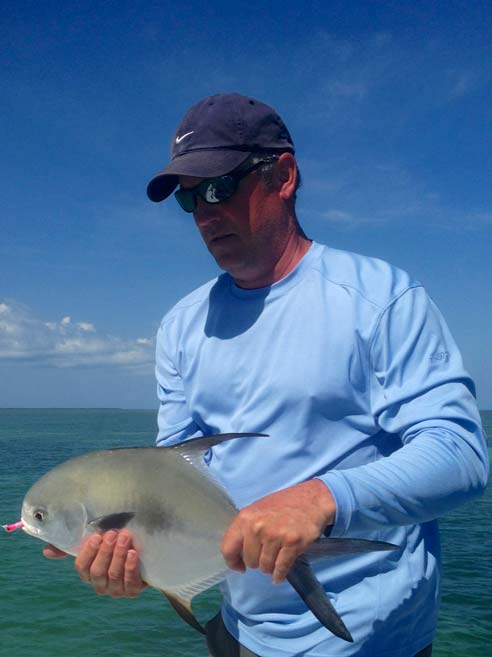 With cooler weather consistently occurring down here, the productivity in the backcountry always amazes. Our islands and shallow channels are flushed with nervous baitfish and followed by hungry predators. When I see frigate birds hovering, pelicans dive bombing, and seagulls making a ruckus, action is imminent. Our seasonal spotted sea trout are thriving, as the water temperatures continue to stay cool. Their activity changes day to day, and they are very tide sensitive as to where they are going to be. I’ve seen a lot of mackerel as well, as they are going crazy over the pushes of pilchards that flow into our shallow basins. Alongside our shallow basin environments, the islands are holding a healthy number of barracudas and mangrove snappers, as they enjoy huddling up in the root systems. I’ve also seen more sawfish this past year than ever, as they randomly appeared in the shallows. On clearer days, I’ll look down on the seabed and see these cool creatures making a mess in the sand. Sawfish are an endangered species that appear to be making a great comeback. These prehistoric looking creatures easily amaze anglers of all skill levels. As I tell my clients, you never know what you may come across down here.

This time of year in the world of Key West fishing, your day can be whatever you want it to be; from shallow basins, where action is king, to the near shore reefs where table faring fish thrive, there’s definitely something that will please you.