April in Key West is an amazing time to see our fishery changing. The waters in the backcountry continually change in temperatures as we still get mild cold fronts from time to time. This causes a good scattering of bait fish throughout the flats and shallow channels. The changing water temperatures really give us a good chance to go after different types of fish on a daily basis.

Tarpon are the main fish people are coming down to catch this time of year, as I had stated in my previous month’s report. They are starting to come in at the mouths of Gulf and Atlantic fed channels that pump water into the backcountry. Tarpon fishing can change daily as the weather in April is so unpredictable. This makes for an adventurous journey as we work several hot spots where they are well known to show their faces. Tarpon bait this time of year is mostly pinfish. I also like to use little tropical fishes and sand perches as these fish swim directly to the bottom naturally when they hit the water, right into the school of fish. This is a better technique to use on a windy spring day when the fish won’t come off the bottom.

The illusive permit is one of my favorite flats species. This time of year, these fish are on what we call the “pre spawn.” Permit are gathering together on the flats and starting to head out together. They go to shallow wrecks in the gulf as well as reefs and rock piles in the Atlantic to spawn. They typically won’t come back onto the flats until May or even early June. This doesn’t mean all of the permit leave at once, but at some point, most mature permit will leave the flats and head to deeper water to spawn. The fish that you may find in the “pre spawn” conditions can range from 20 to 30 pounds. Meanwhile, there are still some fish on the flats in the super shallow water on a regular basis. These fish are usually juvenile permit. Finding these guys is tough sometimes when the weather isn’t cooperating, but when you do, they slurp down shrimp and small crabs. I like to go after these smaller permit when we have slick calm conditions because you can really see their every movement. The low incoming tide is my favorite, as they are more predictable that way. On a deeper tide, the juvenile permit will be harder to find as they can hide in the grass more easily. I use anywhere from 12 to 20 pound fluorocarbon leader, depending on the water clarity. A 1/0 to 2/0 offset j-hook is preferred as well. I don’t have much luck with circle hooks and permit, possibly because of the shape of their lips. 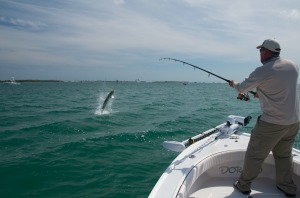 Tarpon jumping out of the water in Key West

Another fish that is real accessible in the backcountry is the mangrove snapper. By volume, there are more of these fish than any other species in Key West. These guys like to hang out in structure throughout the backcountry and shallows. The bigger ones are typically in more secretive areas where they don’t get pressured as much. Finding little pieces of old boats and small sponges or rocks are the most productive. I like to find spots like this that are just a little off of some sea grass. This gives the snappers a chance to find the structure, as they come out of the grass from time to time, especially after fronts. The bigger ones will not make room for the juveniles in these structures, which makes for a nice place to get into some good eating fish. You may also see some lane snappers, mutton snapper, as well as red and gag groupers in these areas. Unfortunately, you can’t harvest any of the groupers down here during April, but at least they’ll make for an awesome fight. Fishing this way is done with small chunks of cut pinfish. Using shrimp will attract smaller snappers mostly. The post cold front conditions or even after a hefty wind is my favorite time to fish areas like this due to the water clarity. When the water is a little murky, these fish seem to not care as much of your presence.

Regardless of what you’re trying to target in the spring out of Key West, you’ll have a pretty good list of options of what you can go after for the day. From tarpon, permit, snappers, sharks, jacks, and mackerel, there is something for every skill level of angler to get tight on. Come see what Key West has to offer as we roll through another month of beautiful weather and great fishing.