Cooler air and water temperatures are letting bait fish thrive all over the inshore waters and nearby reefs. Pilchards are one of the top baits that come in for the cooler months, and are very accessible for many anglers to get ahold of. Threadfins and ballyhoo are also very present, as they make great bait for the offshore ecosystems. Whether you are inshore or offshore, your Key West fishing trip will lead you to some hard fighting species. 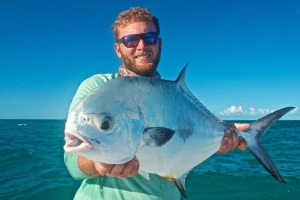 One of my favorite species to go after, the illusive permit, are fairly active on the shallow water wrecks and reefs this time of year. I don’t have as much confidence with them inshore on the flats, as water temperatures fluctuate so quickly from cold fronts. There are a few areas I know they will be present, even though the boat ride may be a little longer. Permit like to hover on top of shallow wrecks on the Gulf side, as they feel comfortable, warmer, and safe. Even depths ten to fifteen feet more than what they are usually swimming in won’t change in temperature as quickly from the cooler weather. They are sometimes in packs of three to four fish, and other times there are fifty to one hundred in a school. They sometimes hang out with jack crevelle near by these wrecks. Often times cobia will be around as too, which make it really hard to decide between which fish to go after. The wrecks are so small, so you don’t have much time on each one, as the fish will figure out what you’re doing. I will typically drift over the wrecks with crabs, hook some permit, and then come back later for the cobia after everything has calmed down.

Once I’ve made a few drifts over these wrecks for permit, and came back for the cobia, I’ll anchor up a good ways up tide from the wreck. I will put out a bag of chum and see who else is home. Often times this will get the cobia to come back up after they are spooked, and you will get another shot or two at them. One trick that works for these wrecks is putting on a crab with a small split shot, and sending him to the bottom. This is a good live bait rig for three really cool target species: permit, cobia, and mutton snappers. Mutton snappers are occasionally sitting right off of these wrecks in small pods. They have large enough mouths to fit in a crab, and will never pass one up if they are there. There are also mangrove and yellowtail snapper, grouper, and mackerel on these wrecks. This makes for a really nice mixed bag. 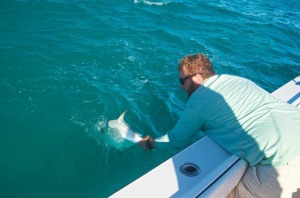 Heading offshore in a bay boat is really fun when the conditions are right. You can move around really easy, sneak up on pelagic fish, and drift perfect with the currents. This is one of the places that those ballyhoo and pilchards come to good use. Once the bait is in the boat, I make a run for the reef. South of Key West between land and the reef can be a little bumpy at times, since it consists of choppy, unprotected water. That’s just when it’s windy. But once you are past that, the blue water awaits not too far away. If it is a little windy, the deeper water will actually be a lot nicer to be in than the more shallow stuff. Waves will be bigger and wider and you will roll versus slam and get sprayed. This is where the fun happens. 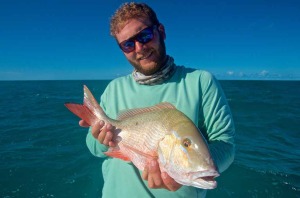 If I have a ton of pilchards, I will use them as live chum. Finding a weed line or any type of structure in the blue water can help on knowing where to start. I throw out tons of pilchards; half live, have crunched in my hand. This creates a feeding frenzy for whatever is around. With that live chum, I hook up a live pilchard and send him back. This way the bait goes naturally with the flow of chum. Bonita, black fin tuna, mahi-mahi, and sailfish will all take part in this feeding moment. When there isn’t any area that looks better than another, I drift live ballyhoo on the surface near blue water color change. It’s like drifting baits for tarpon, but deeper! I have gotten all of those species I listed with this method as well. The mahi-mahi and sails will usually hit this presentation before the tunas. This is a load of fun to do in a bay boat, as you can run from spot to spot real easily and never have to troll. 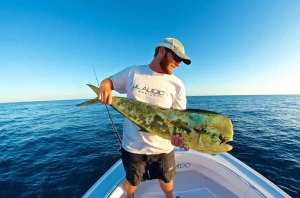