Key West Fishing in the winter time is definitely the best time to get out on the water to target a multitude of species. The cooler waters bring in a large number of bait fish, making our target species thrive. Fish are on the feed, taking advantage of the cold fronts flushing in these bait fish into areas not only in the backcountry, but on some structures in deeper water.

One of my favorite types of Key west fish to go after in the winter months on these wrecks is the illusive permit. Permit are a very difficult fish to catch at times. I primarily fish for them up on the flats in the backcountry, where they are a little more spooky and harder to catch. This time of year, I like to find them bunched up on top of wrecks in the Gulf of Mexico. They often hover at the surface of the water over the wrecks, almost as if they are catching a few rays to warm up. Drifting by, live crabs on the surface seem to be the best snack they can be offered. There are sometimes other species of jacks mixed in with the permit as well, even snatching the crabs in front of them at times. Depending on how comfortable the fish are, you can make several drifts and have multiple hookups on each wreck. What I like about the cooler waters this time of year, is that the sharks aren’t as aggressive near these wrecks. Unlike the warmer months, you have a better chance of getting your fish to the boat without it getting bit in half! This is sometimes what fishing Key West is all about; the circle of life! 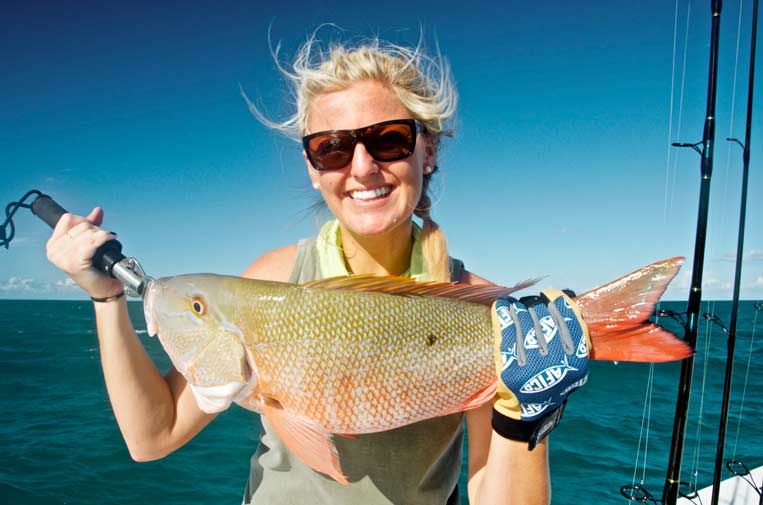 Once I’ve made a few drifts over these wrecks for permit, I will come back for what’s left. I’ll anchor up a good ways up tide from the wreck, and put out a bag of chum and see who else is home. A lot of target species like to hover near the bottoms of the wrecks, especially when they’re a little spooked. One trick that works for these wrecks is putting on a crab with a small split shot, and sending him to the bottom. This is a good live bait rig for three really cool target species: permit, cobia, and mutton snappers. Mutton snappers are occasionally sitting right off of these wrecks in small pods. They have large enough mouths to fit in a crab, and will never pass one up if they are there. There are also mangrove and yellowtail snapper, grouper, and mackerel on these wrecks. This makes for a really nice mixed bag. I like to utilize all aspects of the structure, so we can see all that’s there.

Next after some shallow wreck or reef fishing, I like to head out offshore. I only commit to going offshore of Key West in my 23 foot bay boat if the conditions are calm enough. When the conditions are right, a small boat can be a stealth machine in the blue water. With a quiet engine, and a small profile, it seems as if nothing can sense your presence. Pelagic species are definitely on the list of targets, which include sailfish, mahi-mahi, and black-fin tuna. I load up on some pilchards, a small silver bait fish, earlier in the day. Pilchards make a great live chum to bring fish in a little closer to your boat. I like to fish the color changes a lot, or where I see some birds hovering. Throwing out a few scoops of pilchards in these areas can really get some species on the feed. In the live chum, I place a single bait fish on my hook, and send it back with the rest. Tunas will often times come to the surface and go nuts, eating everything in sight. I have seen dolphin (mahi-mahi) come in and do this as well. I have caught a handful of sailfish on pilchards, but I prefer to use live ballyhoo. I get the ballyhoo on the nearby reefs, chumming them up and netting them. I put them on a circle hook, and let them drift a good ways out behind the boat, usually near one of the color changes in the current. I think it’s sort of like tarpon fishing, but deeper, as I am using one of the same techniques I use in shallow channels. Drifting along, the ballyhoo will always tell you when something is about to happen, as they dance and get nervous. After letting the sailfish eat the ballyhoo for a few seconds, the hook gets set and the battle is on. This makes for a really fun end to the day of catching a big variety of species. Key West fishing this time of year can please many types of anglers after they see how much fun all the variety is.