The fall is in full swing right now. The water temperatures have cooled off a good bit, bait has rushed into the shallows. This is the time of year when you can get into a huge assortment of species, and unlock a few certain areas given our awesome weather conditions. Often times a little further run to a pristine location will reward us with fascinating finds. You’ll sometimes think you really are in the middle of nowhere…

The fall marks my favorite time of year to get out of view of Key West and fish some of the most pristine islands around. These groups of islands are called the Marquesas Keys. Just roughly twenty-six miles west of Key West, this little island chain can put a huge grin on your face. Arriving early in the morning, all you see are birds and wildlife thriving around the island. The sound of commercial fishing vessels is creating a low drone in the background, but doesn’t overtake the sound of nature. There are so many different types of fish that live out there, always surprising me each and every time. I see so many different things out at the Marquesas, that I don’t want to set alarm that I am invading these creatures’ spaces. I typically back off way before I reach a small channel or good depth of water to create a slow entry into some fishy spots. The several times I have fished these islands leave me with memories of each and every spot, and the possibilities of that spot. There are so many areas to fish out there, that you really have to take your time and evaluate what’s at each point of interest.

The first thing that comes to mind when I think of the Marquesas is a permit. These are one of the most difficult fish to catch out of Key West, and considered a very prized catch to anglers of any skill level. Most permit live in a couple of different environments, which make them a good thing to hunt for out in the Marquesas. Permit like to be up on top of the flats, edges of channels, on and in between patch reefs, and shallow wrecks. Since we have all of these environments within a few miles of each other out in the Marquesas, it gives us quite a few options when going to look for permit. Some days permit can be seen on all of these types of environments. Most of the permit I’ve put my anglers on are hooked by sight casting, with a precise landing of a live crab. A lot of people don’t have the patience to fish for permit, but that is the number one key to giving you the best opportunity for a hook up.

When people come down to fish Key West during the fall, they typically don’t have tarpon on their minds. It is not a usual fish to target in the cooler months. Tarpon migrate in the spring, meaning mostly all of the tarpon have came and gone already. There is one exception to fall and winter time tarpon fishing: resident tarpon. These resident fish, as many of us like to call them, don’t really seem to leave the waters of the backcountry. They are mostly smaller tarpon in the five to forty pound range, living in small pods. Early mornings are the best shot this time of year when you want to target a resident tarpon. The Marquesas Keys gives us an opportunity for these resident tarpon, because there seem to be a handful of fish that just happen to always be around. Every time though, they are in a different area which makes the hunt even more fun. 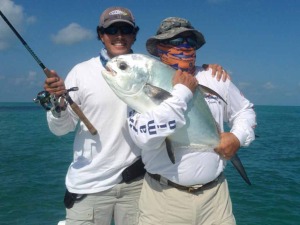 A species that you don’t hear too much about in the Lower Keys and Key West is the illusive snook. These fish are a little more common further up the Keys, as well as the rest of central South Florida. I see snook in different areas all the time out in the Marquesas Keys, and a lot more on more cooler days. The cooler waters seem to make them more active, but they are still extremely finicky considering their harsh predator driven environment. They are a little harder to get to bite than most species, so when you do get one it is a definite treat and add-on to your day. Most of these snook will be under a brush pile or some shaded area. You have to look really hard sometimes when pointing one out, which is why I think people overlook them. Casting some small live baits up into snook-like environments is the best bet on getting one to some creeping out.