I love our cool mornings in the Key West with eagerness to go explore the post cold front conditions…with a hot cup of coffee of course. Many weather fronts we get in the fall and winter months can noticeably adjust the productivity in the backcountry and nearby reefs. Loads of baitfish flush into our shallow water estuaries where they soon become meals for our aggressive seasonal species. Fish seem to move towards structure as well, and get all bunched up ready to thrash on whatever stinky bait that comes along. When the waters cool off is when you have the best chance to see a wide variety of species come to life. Make sure you keep track of what you’ve caught because once you run out of fingers, you’ll be wishing you wrote all the species down! 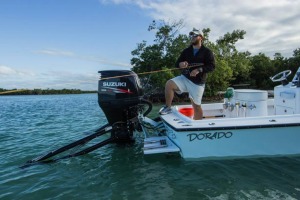 The start of my day when fishing the backcountry this time of year begins with a fairly short boat ride to the chain of islands that make up the Great White Heron National Wildlife Refuge. I head for areas that are a tad bit murkier than your average Key West clear waters. Yes, we have all this beautiful crystal clear water and I choose the murky stuff. I do this because where the water dirties up, typically tells me where the fish have a good possibility of feeding. My tactics for getting hookups in these areas include mostly artificial lures and jigs, with a dash of live or chunked bait. The only thing that really prevents me from using too much natural bait is the presence of larger baitfish and juvenile snappers in the area. They will tear up your bait before the targeted species sense it. I tend to drift around a lot since the winds are usually somewhat apparent this time of year. These winds help me cover lots of ground, not to mention dirty up the water.

People often curiously ask me what types of fish species we see out of Key West in the winter months. I tell them literally, everything. In one day of fishing the backcountry, anglers have the possibilities of seeing spotted sea trout, roughly 5 species of jacks, 4 species of snappers, 4 species of groupers, barracudas, 7 species of sharks, ladyfish, a couple different types of mackerel, cobia, redfish, and if it’s warm enough, your occasional juvenile tarpon. That’s 20+ species of fish! The chances of catching all of them in one day is a little farfetched, but I’ve came back to the dock with species counts of 14-15 different types of fish. That’s a pretty good diversified catch. 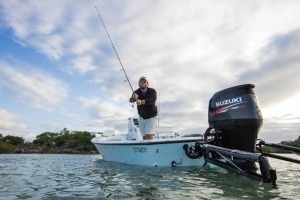 If anglers want to catch even more, and add some tropical species to the list, I’m never opposed to fishing various patch reef structures to add to that big species list. Sometimes this is even more productive than the backcountry, depending on the conditions. A few of the species I named off earlier also live in these structured areas. The patch reefs do really well when the backcountry waters are still a little chilly from a previous front. Shallow waters cool off a little more than the deeper depths, causing fish to act a little lethargic. Finding waters that are even 10-15 feet deeper can make all the difference in your productivity. I like to use mostly cut bait in these areas. I’ll occasionally chum up the waters to get the party started. I will leave a live bait or two a little further back behind the boat, hoping for a lone mutton snapper or grouper to creep up for an easy meal. Dropping cut bait down into the target zone is what this game is about. Not all the way on the bottom, but usually a few feet from is my best bet. Get ready to rip on some fish though, because if you aren’t ready, these tropical species will steal your bait before you even know what’s happening.

The winter months in Key West are some of my favorite times of year to fish. Setting this time of year apart from the rest is seeing all of those species thrive, despite the cooler conditions. For the types of fishing I’ve described, now until early spring is the best chance for productivity. I’ve seen winter species as late as early May, but the consistency of the tactics I described is slim that time of year. The primary tool that really allows me get the diversity out of my fishing, is my 23 Dorado bay boat. If you aren’t familiar with what a bay boat is, it’s a hybrid between a flats boat and a light tackle center console boat. The 23 Dorado gives me the best of both worlds. I can get fairly shallow, while feeling comfortable in almost any chop. I’ve primarily fished from bay boats my whole life, and the options this type of vessel gives me are impressive. If you get the chance, take advantage of these cooler months and get out there and fish!