The fishing season in Key West is about to be at its prime. Many folks from all over the country come down to Key West this time of year to take advantage of the beautiful weather and amazing fishing. There are many different types of fish to go after right now as the seasons are changing. We are still seeing a lot of winter time species in the backcountry with our spring tarpon showing up here and there. The amount of possibilities in your day is endless, as the waters of Key West are filled with action and variety.

Tarpon are a local fish to Key West, but a majority of them that we catch are migratory fish. Tarpon migrate into the Florida Keys in the spring, which starts their long journey throughout the state. We start to see them this time of year in some of the deeper channels on the edges of flats in the backcountry. They are in decent numbers when they do show up, ranging from five to fifteen fish. Size ranges of Key West tarpon are from twenty to one hundred fifty pounds. Tarpon are one of the most sought after fish for our spring time and seasonal anglers because of their strong and powerful fight. They eat a variety of bait, artificial lures, and flies. Tarpon are known for their leaps they take out of the water, and can jump as high as six feet. The jump adds to the battle and complexity of the fight because of the abrasive jaws they have, as well as sometimes dislodging the hooks from their mouths. Tarpon aren’t like your average fish that you can just fight and reel on in. They sometimes have you take many steps in order to land them because they can get off so easily, as well as get second winds. Year after year they seem to be a favorite species among many of my anglers. 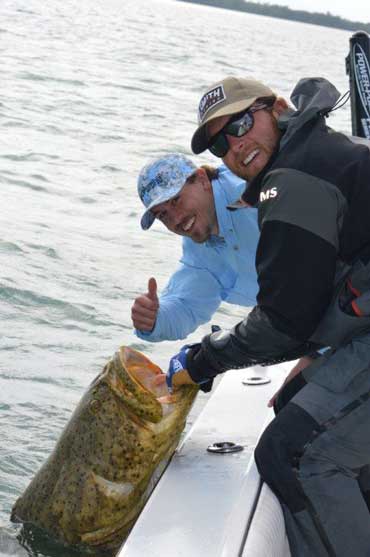 Goliath groupers, a fish most don’t know exist in the backcountry, are also in our shallow channels. There are big sponges, holes in the grass beds, and even small wrecks that goliath groupers like to live near. Juveniles even live up near the mangroves, hovering in the shadows to await a snapper or bait fish. They are mostly known for their presence on reef type environments, as well as deeper wrecks. Goliath groupers eat just about any decent size fish that comes near them, and can get up to eight hundred pounds. The backcountry has goliaths that range anywhere from ten to two hundred pounds. Most of the sizeable goliath groupers that have been caught on my boat have been by surprise. When reeling in other fish from the area, goliaths sometimes grab onto your fish and steal it away from you. They occasionally let it go, which you can tell just by the bite marks that it was a goliath. From then, I can put down bait big enough for them to bite onto, with the correct sized tackle. Goliaths are very hard to get away from their structure, and can even pull the boat in a certain direction when hooked up. As far as structures under the surface, the goliath is definitely the ruler of its environment.

As previously stated, we have a great amount of species that exist this time of year in the shallows off of Key West. There are a lot more manageable fish to catch out in the backcountry other than the hefty tarpon and goliath groupers. Many fish can be caught on artificial lures since they are so aggressive. Species that we are catching right now in the backcountry include sea trout, pompano, jack crevalle, sharks, yellow jacks, ladyfish, barracudas, cobia, and a big assortment of groupers and snappers. I have had anglers catch up to seventeen different types of fish in the backcountry in one day. In the backcountry, the buck tail jig has become one of the favorite things to throw for myself and other captains. This type of jig can be used in many different ways to work the whole water column. Faster retrieving can entice fish feeding on the surface, or you can let it sink down a bit to engage the fish living near the sea grass. A lot of the species we catch are just for fun, but we have also been targeting some of the more edible fish like mangrove or lane snappers. These are great to bring home for a nice lunch at the marina, or to get cooked up downtown for dinner. It’s nice to have this great variety of fish to go after in such a beautiful place, making your day limitless.

Coming to Key West this spring? Inquire to book your fishing charter for Key West here!

Find out which fishing charter Key West has for you!