The time is now to get out on the water to enjoy a fishery that comes and goes, which is the winter time fishery. This time of year in the backcountry, Key West fishing has many types of species to target in the shallows. The weather patterns we get this month give us the opportunity to catch a bunch of different varieties of fish each day. 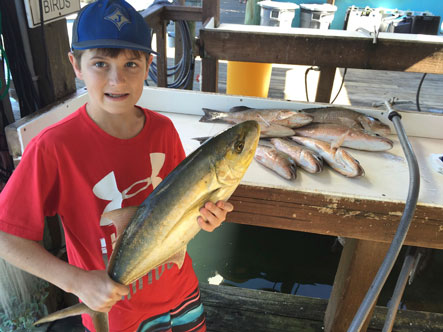 The cooler days in the backcountry are great for many things. The water is usually a little bit churned up from the cold front that has just passed, which can give our anglers the upper hand. The deeper channels in the backcountry are where we find some quality sized mangrove snappers to bring back to the dock for dinner. Mangrove snappers fight really good in shallow water, as they are trying to get you hung up on the structure they are living near. These mangroves, or gray snappers, are mainly feeding on small bait fish and crustaceans that are moving through the channels with the tide movements. We typically drift down small live baits to these snappers, which helps us target some really good dinner sized fish. Mangrove snappers can be picky at times, and you really have to use finesse to get the hook set. Some snappers will drop your bait as soon as they feel tension; so letting them eat is key. In these channels we will also catch some red and black groupers, and the occasional mutton snapper. There are a lot of species that cruise through shallow channels, but the mangrove snappers seem to have the biggest presence on the bottom.

Key West fishing’s cooler weather advantage is being able to fish the shallow basins between our chains of islands. These shallow basins hold in an enormous amount of bait fish that gets flushed in through channels from the Gulf of Mexico. Bait fish, and other species (following the bait) get flushed into the mouths of these areas, and continue to disperse throughout the surrounding area. These fish include sea trout, mackerel, ladyfish, sharks, and many species of jacks including pompano and blue fish. You never know what you’ll get into when fishing these shallow grass beds, as so many different kinds of fish are hanging together. When the water is murky it seems to be best. A lot of anglers like to throw artificial plugs and jigs out in these waters, as the target species are so aggressive that bait is not necessary. Using artificial jigs and lures can really bring mass amounts of fish to the end of your line, while covering some ground throughout the backcountry. Live bait in these areas can be a really effective way to target a few species as well. There are only some types of fish that will eat live bait, which narrows down your possible catch. Around the mangrove islands, barracudas and baby goliath groupers will be the main fish to look for hiding in the shadows. If the weather really gets cold for the season, redfish will often be seen in these same locations. 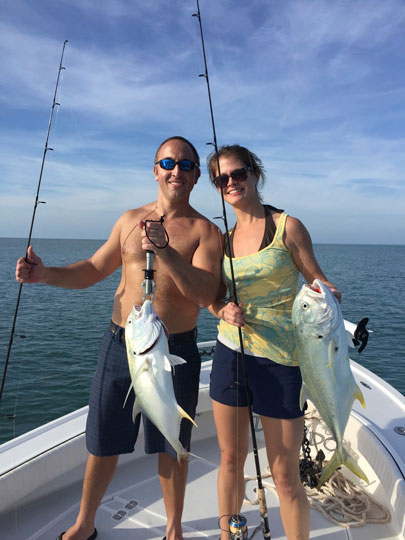 The warmer days that we are given can really be a game changer this time of year. The sun beating down on the shallows can make the water temperatures rise real quick, and a few select species will show themselves. Sharks are the first things I think of when the water gets warmer, as many people are always asking what the biggest fish is that we can get into this time of year. Sharks get very aggressive when the water temperatures rise. Sharks will eat many fish that you are trying to reel in, which can make for a really surprising battle. The main sharks we get into this time of year are lemon sharks, black tip sharks, bull sharks, and the occasional hammerhead. These sharks are all patrolling the shallows looking for an easy meal, and will aggressively attack anything that smells edible and bloody. Fishing for sharks, we cut up some fresh and bloody fish to lure them in. Making a blood trail fish bring sharks from the nearby area closer to the boat.

Tarpon sometimes also come out of their hiding as well on these warmer days, yet are still in small numbers as the majority of tarpon are not here yet in their migration. Most of the times under these tarpon there are other varieties of fish that follow them. Yellow jacks and large jack crevelles hang out with them, and give a very fulfilling fight. Juvenile permit also come up in the shallow channels and appear to be sunning themselves at the surface. Throwing a shrimp or a live crab into the school can reward you with a great fight with this super illusive species.