The cooler weather we have been experiencing down in Key West has really been a game changer out in the backcountry. With the lower water temperatures and a plethora of bait fish coming in creates madness in the shallows. Fishing different types of basins and shallow channels gives us the best opportunity to see a nice variety of fish and a great day on the water. There are tons of options in what you can do throughout your day this time of year, making it one of the most productive times to get out and catch a little bit of everything.

I like to take my clients out to areas where they can just catch a little bit of everything this time of year. For those who don’t want to spend their day just searching out a single bonefish and permit, it can be a total blast throwing jigs and small live baits in our shallow channels throughout the backcountry. Buck tail jigs are good for just about everything, so that’s what I prefer. Trout, jacks, snappers, pompano, mackerel, sharks ladyfish, barracudas, and sometimes a lonesome redfish. Blind casting in five to ten feet and jigging at different depths can really create an eventful day. The type of water that we drift through is primarily dirtied up from the mullet muds and created a nice feeding frenzy in the mud slick. The bottoms of this area contain tall grass, with pot holes here and there, creating the perfect environment for action. Key West fishing in the backcountry waters can get you some of the most variety you’ll ever see in the shallows.

Sea trout are considered one of the jewels of the Key West fishing winter time backcountry variety. They come down to Key West only in the cooler months, even sometimes as early as late September. Trout are sometimes hard to pick out of all the other species that are attacking our lures and baits, but when they are fired up you’ll catch a few in a row. The techniques for catching trout down in Key West are fairly basic. While drifting through shallow grass basins, artificial bait is definitely most effective. Light colored buck tail jigs and soft plastics like Gulp and DOA on jig heads do the trick. The reasons I use artificial are because there are so many different small bait fish and baby snappers in these areas that you won’t even feel getting robbed. Every once in a while I can get away with a live shrimp, but it usually just gets nibbled to shreds. The live baits to use in these areas would be small pinfish on a twenty pound leader with nothing bigger than a 4/0 hook. 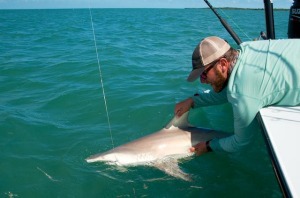 We catch a lot of fish in these areas that are extremely fun to catch, yet aren’t edible. Fish like this are extremely plentiful and I don’t feel too bad using a couple for some shark bait sometime throughout the day. There are a ton of sharks that roam these waters in the winter time, ripping through mullet schools and anything else they can easily obtain. The most common sharks I see in these areas are black tips or spinner sharks. Black tips, in my opinion, give the best fight out of any other shark in the area. They give very hard runs that make you wonder if they’re ever going to give up. Black tip sharks will fight all the way till the end, and run even a couple more times when they see the boat. Small ladyfish and small jacks or blue runners make the perfect bait for sharks. I just drift them behind the boat with a little bigger rig and, definitely some hard wire leader. I use thirty pound monofilament line on my shark rod, but the leader combination is key. I double my line for about four feet, then tie that to eighty pound mono leader, then go to a big swivel, then to roughly one hundred pound wire, then use a haywire twist to attach the 7/0 hook. This combo seems to work perfect. The 80lb mono is so you don’t tear up your main line on the shark’s abrasive skin.

Something I’ve seen lately is permit hovering in channels next to small islands on a falling tide. Primarily smaller, “micro,” permit, they are schooled up in big numbers. I always keep a buck tail jig ready to throw at them. I would throw crabs, but these permit are mostly too small to eat a cast-able crab and therefore spit them out when they feel any pressure. Permit seem to like the jigs too. Tipping with shrimp gives an added incentive but is not needed if jigging correctly. The only bad thing about catching permit in such a predator rich zone is that sometimes sharks try and chase your fish to take a little snack for the road!