Some years we see pretty warm conditions that feel more like spring and summer. Other years we get some pretty strong cold fronts that prompt locals to go out and buy more winter wear. This year we are seeing a little of both. There have been several days where the weather seems to cram three days of conditions into one. This makes for some awesome fish movements and can bring things to life even more. Key West fishing in the winter months is always a great event.

Zigzagging through mangrove channels, I like to look for areas that lock in bait. This time of year, pilchards are the big time food for most of the fish inshore. Nice jacks rip through shallow channels waiting for the bait to get flushed in or out. Throwing plugs and buck tail jigs is a preferred method of luring these guys in. You’ll also get an occasional mackerel or small shark too. Some guys prefer to throw flies on the edges of these channels to see what aggressive sport fish will take part in the fun. Jack crevalle, pound for pound, are the best fighting fish that follow these pilchards, and make for a sweet fight on light tackle. If the water temperatures are warm enough, some bigger predators will also be in the nearby area of this feeding frenzy. Bull, black tip, lemon, and the occasional hammer head sharks will be cruising through these areas as well. Sometimes you can’t get your fish back to the boat fast enough before the sharks come speeding in after what’s on the end of your line. It’s awesome watching the three to four levels of the food chain feeding in one small area at once.

The water temperatures can really affect what type of fishing is going to be more productive some days. I recently spent several days fishing the Marquesas Keys, my favorite area to fish out of Key West. Depending on how cool the water is, and where the tide is at, dictates to me what type of water column will be most productive. Some of the channels leading into these islands can be super productive, as there is so much bait moving around. If the tide is too low, and the incoming tide hasn’t started to really push anything into the area, these channels may be pretty boring. Luckily, there are many nearby areas to go and rip on some fish. Shallow patch reefs that surround these islands can be the ticket to having a successful day. Sometimes you will have to put up with a little bit of chop or mild swells, but that’s where the fish will be. Coral heads and hard bottom areas have the most life, as many species ball up together. From yellowtail snappers and pompano, to grouper and mackerel, there will be something there to put a smile on your face. The abundance of fish can be so great that you won’t even need to use chum or even bait. 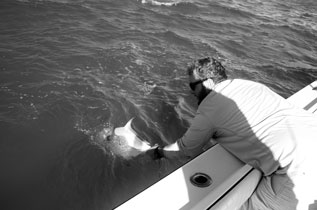 Shallow wrecks are another part of my day when I’m out in that general area of the Marquesas. Depending on the winds, we can really get some work done out on these structures. Cobia is the most popular fish that everyone wants to get into on these wrecks this time of year. It takes a bunch of nice cold fronts in a row for them to show up. They aren’t extremely friendly and won’t show their faces most of the time when they are there, but once they realize there’s food for the taking they’ll come right out. Pinfish is my choice of bait on these wrecks as I’m just drifting over them for cobia. It will be hard to keep the barracudas off of your live bait, so we make precision casts to these big brown beasts. Sometimes the cudas are so thick we have to use crabs. Cobia will eat either bait, but crabs narrow it down to hooking just them, as barracudas won’t really be interested in those critters.

Permit are another species that seem to thrive in the cooler weather. They bunch up on the shallow reefs and wrecks and catch some heat rays at the surface. Some days they are so hungry that you can catch several of them in one spot. Crabs aren’t always the only way to catch these guys. They like buck tail jigs as well. Sometimes even a little bit of shrimp attached will help with their commitment to suck in the jig. Such beautiful, strong fish these guys are. They are a nice addition to our species count for the day. We sometimes tag them before releasing them, and watch them swim away healthily back down to their friends.