The New Year is here with another fun filled season of catching ahead. The Key West tarpon season is right around the corner, as well as the permit spawn at the reefs. The cooler weather we have been experiencing down in the Keys has given us the opportunity to get out on the water and catch an amazing variety of species. This time of year we are focusing on a little bit of everything, as well as our larger species that eat everything.

Barracudas are very present on the flats and in the backcountry this time of year. We catch them year round, but they seem to make a bigger appearance with the cooler waters. They sit on tops of the flats in very shallow water, usually by a sand hole or a lighter patch of grass. This is a good scenario for artificial plug fishing. I like to throw Bomber’s line of suspending twitch baits, as well as some other near surface lures. Barracuda tubes are a big thing down in the Keys, which are a eight to ten inch piece of surgical tubing (colored), with treble hooks on it. These imitate needlefish and ballyhoo that happen to always be present on the flats. Barracuda tubes can be really effective if the conditions are right. They aren’t as accurate as a plug, and can really get off course if it’s really windy. Barracudas like to see things fast moving, which is how we fish for them with the lures. Once casted past them, you reel in faster than you’ve ever reeled in a lure before. The fast motion makes it look like your bait is trying to get away from them. If you slow it down, they inspect it and will not take it. Barracudas also like the islands, where channels run along side of them. They poke out between mangrove shoots, making them really hard to see. This is when blind casting works well. Working the banks of these islands can be very affective. You might even pick up a nice mangrove snapper or juvenile grouper as well. 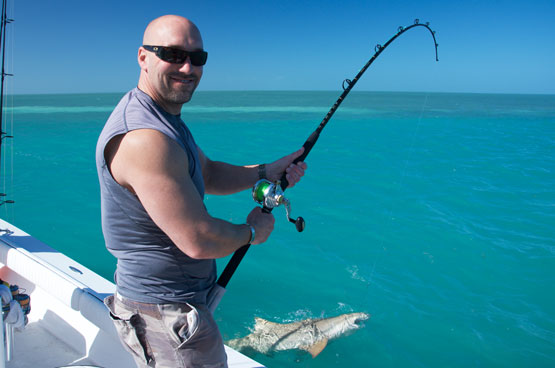 Sharks are the big game of our winter months. While tarpon are not always present this time of year, they are a good option for pulling on some bigger fish. There are many different types of sharks that live in the backcountry in Key West including lemon, black tip, bull, sharp nose, bonnet head, spinner, and every once in a while a tiger or a big hammer head. The most common sharks we see are the black tips and lemon sharks. The lemon sharks like more of a shallow area on top of a flat or right next to, while the black tips and bull sharks rule the channels. A lot of times we will be fighting fish in one of the channels or on the flats and these sharks always seem to find us. Looking for a free meal, they will swipe up at your fish when it is almost boat side and frighten those who aren’t paying attention. The barracudas and some species of jacks we catch make great shark bait. Since both have no eating quality, bag or size limit, we can enjoy their usefulness at bringing in the predators of our ecosystem. Each type of shark we catch has a different kind of fight, which makes them a fun species to try and lure in.

Elsewhere in the backcountry, we are seeing a good mixture of species in the shallow basins and deeper grass beds. Sea trout, snapper, jacks, cobia, pompano, mackerel, and sometimes redfish can be caught in these areas. They are all mixed together in these areas with taller grass in six to eight feet of water. Bouncing buck tail jigs on the bottom or mid level gives us the best opportunity to catch each type of these species. They are in areas with good tidal flow, but no direct shot to any big body of water. Mostly on the Gulf side, there are channels that feed areas like this where bait gets moved into the shallow basins. The fish that we are targeting have no real reason to leave other than predators. They feed on all the bait that gets flushed in every day, and will stay in these habitats until the water warms up or bait thins out. Drifting through the basins can be a super affective way to target a large variety of species, while covering a big area.

The New Years in the Key West fishing world is already being filled with new memories of catching a nice variety of species in a beautiful environment. Key West in the wintertime is a favorite among many with cooler weather, lots of fish activity, and small crowds back on land.