The spring rush has come into full effect. The backcountry is on fire as many different types of fish thrive. The warm weather mixed with a little bit of breeze makes for a really relaxing and comfortable day out on the water. This time of year we see some very large predators in the shallows, which is why April is one of the most popular months to fish out of Key West.

I recently got to fish with a couple of guys from New York who said they really needed to get out of the cold weather. Taylor and his uncle were along for the ride as their wish came true of being in the tropic temperatures of Key West. The first day I fished with them we went after a lot of variety. Snappers, jacks, barracudas, sharks, and mackerel were our species, which made for a really fun day of catching. Some of the snappers they got were later on filleted and cooked up for lunch at Hurricane Hole Marina, while they got to talk about their active morning fishing trip. They were so amped up on seeing some fish swim around at the dock though; fish they had seen around other marinas of Key West. These happened to be the tarpon, which is what they wanted to fish for the next day. Knowing that it wasn’t the same type of fishing they had experienced the prior day, they were up for a battle and of course, the hunt.

The Key West tarpon is, in my opinion, the most popular type of fish to target this time of year in the backcountry. Making their migration up the coast, these big silver beasts take over the shallow channels and flats in the backcountry. Tarpon are mostly feeding on small baitfish that flow through the channels in the backcountry. These baits usually consist of crabs, shrimp, pinfish, ballyhoo, and even little tropical fish. The way I spot tarpon out on the water is usually by watching them “roll” at the surface. Tarpon roll, or breathe in a gulp of air when they come up. They have a modified swim bladder that lets them take in oxygen from the atmosphere so they can live in oxygen poor environments. When a tarpon gulps in air while you are fighting one, this usually gives them a little bit more energy. 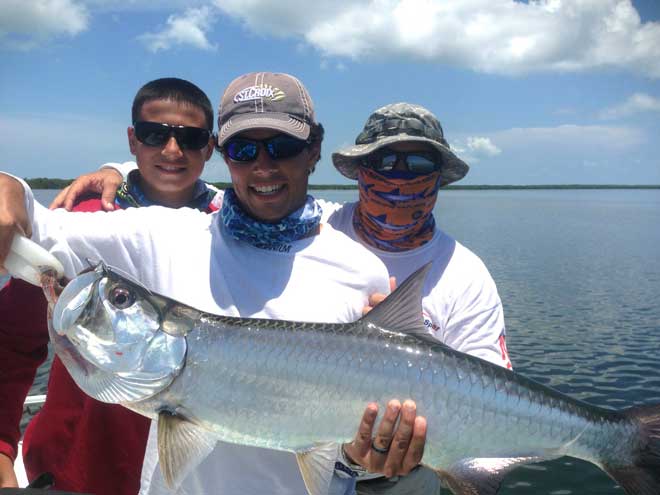 Posing with a Key West tarpon.

Taylor was ready to take on one of these prized Key West tarpon. This is a type of fishing that I always like to stop and explain when we get to the spot. Before the lines go in the water, I explain how the bait is going to feel on the end of the line, what to do when the fish takes the bait, and what to do after the fish starts running out the drag. Taylor understood and now we were ready to fish. As we saw some tarpon starting to roll in the channel I had chosen for us, we set the boat just up current of them. We had found the perfect distance from the fish. I like to be just far enough away to drift baits to them, but close enough to not have a huge amount of line out. We had gotten our lines out there and watched as these fish went from channel edge to channel edge, coming closer and going further away. They were moving around quite a bit, so I knew that sometime soon they would see our live, tasty pinfish hooked to a circle hook. All of a sudden Taylor looks at me with a huge grin as his rod doubles over and line begins to peel off of his reel while his big silver tarpon leaps six feet out of the water. The fight was on, but Taylor was in it to win it. After several more jumps and huge runs this fish made, we finally got it up near the boat to where we could start to focus on getting the fish landed. Tarpon aren’t the most calm fish near the boat, as it splashed us and shook it’s head while I tried to grab it’s jaws. Finally we got him. Before releasing it, we got several pictures and of course a DNA sample for the tarpon-tagging program. Taylor was excited as he could show all his friends his pictures when he got back into his snow-capped city.

Just like Taylor and his uncle, you could be out on the water catching a variety of species too. A lot of people like to do a little of both, from tarpon fishing in the morning to catching a bunch of different species in the afternoon. But which ever you decide to do, you’ll be doing it in paradise with the awesome spring weather.

Give us a shout today to book your Key West fishing trip!